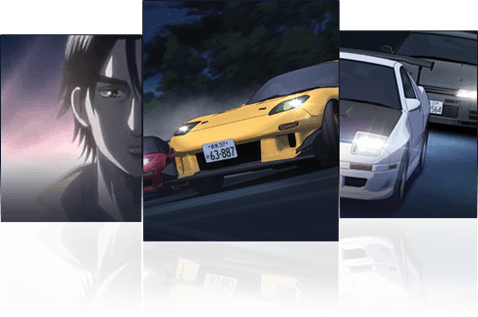 I am really pleased to see how smooth the radio station is running. If you haven't already check out our radio broadcast, I strongly suggest you take a quick look at it.

Aside from that, Initial D Battle Stage 2 was finally released in DVD format on May 29th, 2007. Thanks to AE86Takumi, one of our members on the forums, for uploading a sample video of Battle Stage 2. Click here to download it. We strongly encourage you to purchase it using one of our affiliate links ( YesAsia | Play-Asia ) if you like what you see. Doing so will help out our server cost and support the original author of the work at the same time. But if you don't feel like downloading the whole video, we've also uploaded the 8-minute-long trailer video which can be found from the Initial D Fourth Stage Non-Stop Mega Mix with Battle Digest DVD for you to sample. Simply click here to download it.

Great news for the fans who are following the manga series. Volume 35 was just released last month on the 19th, the Chinese version was released three days ago in Hong Kong. BiBi, one of our forums members, was kindly enough to provide us with some of the high resolution scans of Vol.35 in Chinese (High Quality - 27MB | Medium Quality - 15MB). However, there are still no English scanlations available at this stage. If you want to keep yourself updated on the English subtitled version of Vol.35, I advise you to keep checking our forums as most of the Initial D news are being released there first hand.

And yes, there will be a new Initial D album coming and to be released on June 27th, 2007. It is the Initial D Arcade Stage 4 Original Soundtrack. You may pre-order it using one of our affiliate links. ( YesAsia | Play-Asia ) Song listing for this album will be provided in the next update. That's all the Initial D news for now. And I apologize for lack of update during the past few weeks, I am quite busy as of late. Hopefully I can devour more time on the site in the upcoming summer. Thanks for all of your support.

We have a new addition to the site, everyone ! Introducing radio.go2id.net. It is an online radio station which uses SHOUTcast as its broadcast program. The radio station will play at least 12 hours of Initial D / Eurobeat music every day from 4:00 AM ~ 4:00 PM PST. The rest of the time will be devoted for DJ hosting. There will be music requesting and shoutouts depending on the DJ. This is the current DJ Schedule / Hours / Playlist.

To tune into the radio, simply click this link - http;//go2id.net:8000/listen.pls. You will need software like Winamp, Itunes, VLC Player.. etc to stream the content. The radio station currently stream at 96kbps, 44,100Hz in Stereo. We recommend having at least a DSL connection before tuning in, for smooth streaming. Tune in to listen to the Initial D World Radio Broadcast today. Remember to give us your feedback on our forums - http://idforums.net/index.php?showforum=58 and spread the words out. =)

0 Likes | Comments We have a new addition to the site, everyone ! Introducing radio.go2id.net. It is an online radio station which uses SHOUTcast as its broadcast program. The r&redirect_uri=http://go2id.net/" class="sharelink" target="_blank"> Shares

MP3 Section updated. As promised, the album Initial D Non-Stop Mix from KEISUKE-selection has been uploaded. Total number of downloadable MP3s is now 204. The next update will include more Initial D albums and possibly the Battle Stage II trailer video.

A new Initial D album called Initial D Fourth Stage Non-Stop Mega Mix with Battle Digest was released on February 28th, 2007. The album consists of two CDs and a DVD. The DVD features a 8-minute-long Battle Stage II trailer. According to the trailer, Initial D Battle Stage II will be coming out in May 2007. Like Initial D Battle Stage, Battle Stage II will features all race scenes from Initial D Fourth Stage, including the battle with Keisuke Takahashi (FD3S) vs. Atsorou Kawai (ER34) and the battle with Keisuke Takahashi (FD3S) vs. Sakai (DC2). Keisuke fans, make sure you don't miss this one. To preview the trailer, please visit here. To order the Battle Digest album, visit this link - http://www.play-asia.com/SOap-23-83-1ckn-7...-j-70-1rqf.html

More albums on their way

First of all, I apologize for not updating in such a long time. I've been very busy with school work and such, and just have no time with the website. Anyhow, from now on you may comment on the updates. Simply click on the comments link on the bottom right hand corner of this update. You must register as a forums member before commenting. The entry you are reading right now is fed directly from the forums. Expect to see more updates from now on because updating is as easy as making a new topic. MP3 Section has been updated. Several new albums have been added and uploaded. Albums uploaded: Vocal Battle, Sound Files Vol.1 and Second Stage D Selection 1. Albums added: Fourth Stage Sound Files, Fouth Stage Sound Files 2 and Fourth Stage D Non-Stop Selection. Total number of MP3s: 165. If you are wondering about the old 2006 updates, they've been archived here along with the other older updates.

0 Likes | Comments First of all, I apologize for not updating in such a long time. I've been very busy with school work and such, and just have no time with the website. Anyhow, from n&redirect_uri=http://go2id.net/" class="sharelink" target="_blank"> Shares